You do not have permission to view this form. 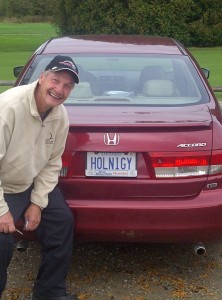 Ever since we started the Hole in One Club in 2008 our staff hears the same question at least once a week. In 2008 we started putting everyones name up on a hole where they were lucky enough to have a hole in one. We decided at the time to only put up the names of people who had a hole in one from the time of the sign construction forward with one exception Charlie Wright. When you have someone who has had 9 hole in ones at your golf course we felt it was a worthwhile exception. It turns out that an unknown legend was exposed. We are regularly asked “Who is this Charlie Wright” and “Does Charlie Wright even exist”. Well he does exist and he is a great individual.

Charlie Wright has been a member of Orr Lake Golf Club for almost 40 years. He is 68 years old, plays off a 6 handicap and gets out about 4 times a week. He is one of the nicest people you will ever meet, never has an ill word to say about anybody else, and will play with anyone of any ability. He has been used as a consul for the previous owners when doing design changes over the years and has always been an extremely loyal Orr Lake Golf Club member. While others have come and gone and come back again Charlie has always stayed. He has been interviewed on the A Channel for his great feat of 9 hole in ones and has always been a great advocate of Orr Lake Golf Club. As a result we awarded Charlie Wright with an honorary membership and placed a plaque in the clubhouse as a record of his hole in one achievements.

UPDATE: 2013 – Charlie Wright has now had a Hole in One on every Par 3 Hole on Orr Lake Golf Club. He was previously missing the 14th hole but achieved that last year. Although…………..technically speaking we rebuilt the 10th hole 3 years ago and moved both the tee and the green so although he did get one on the old 10th hole he doesn’t yet have one on the newly designed 10th hole!!